Whenever someone uses the acronym MVP, Minimum Viable Product, I feel that we should make them explain what they are actually talking about. There are lots of things folks call an MVP, that totally miss the point. Here are a few humorous ones I’ve encountered:

And then of course there is the engineer backlash against MVP concepts, which is totally justified:

Okay so we’re gonna do the mvp of this bridge. Just enough engineering to stand it up. Once we get a few thousand cars going over it a day we will hopefully get a seed round and go back and fix the tech debt

And then of course, this graphic, which kicked off a giant bike-shedding session: 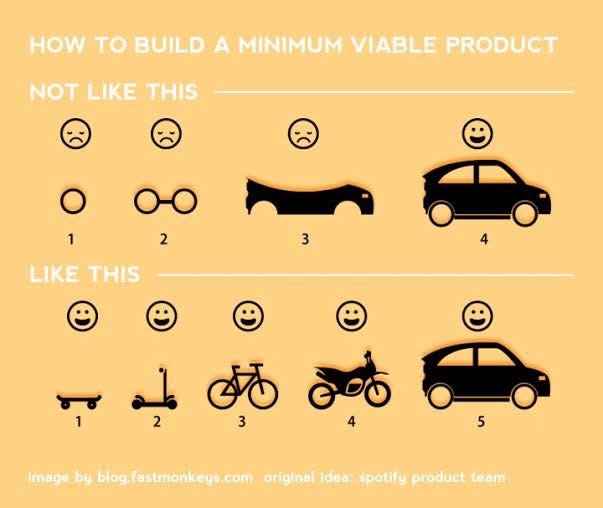 Engineers were talking about how neither of these two sequences “are really an MVP”. I think they’re wrong. Here is why: the second sequence does not describe the “MVP of a car”. It describes the MVP of “how can I get people to buy a transportation product to go from A—>B”. You don’t even know if people will pay to go from A—>B, so don’t build a car. Build a skateboard, on the cheap, and see if you can market that as the solution that people will buy. Once you’ve proven they will pay for a solution to the problem then you can start building more expensive things.

For Scott, talking about building a bridge, the MVP of building a bridge is not a smaller bridge made out of duct tape. The MVP of a bridge is probably a row boat. Then a ferry. Then a bridge. If you look at history that is, quite literally, how many bridges came into being. In both Boston and New York the bridges across their respective rivers were only built after ferry services had operated for decades showing that if the cities wanted to build a bridge, it wouldn’t go to waste. Obviously the financing was different—but imagine being a politician who puts forward a public works project like a bridge with the associated tax to build it without proving its what people want?

Minimum viable products are not “the smaller version of the real thing.” They are not “what I can afford right now.” MVPs are the testing of a theory. Testing a theory should not be expensive. And you don’t even need a full blown application to test a theory. You can literally use excel if you have to; or something else, it doesn’t matter.

We engineers get confused thinking that people actually give a crap about the technology that goes into what they buy. They don’t. They buy solutions to their problems. If you are offering a service, and use excel to fulfill it, customers don’t care. They won’t wince. They won’t go to the next shiny application. If you solve their problem well, at a price they are willing to pay then you have tested the theory that someone will pay for that service. That is all an MVP really is.

Craigslist is a real-world example. What was the MVP for his website? An email newsletter. Not even close to the same thing. Not scalable. Not automated. But it proved that he could get eyeballs for classifieds on the internet.

I propose that we come up with different terms for the other things that people are using MVP.